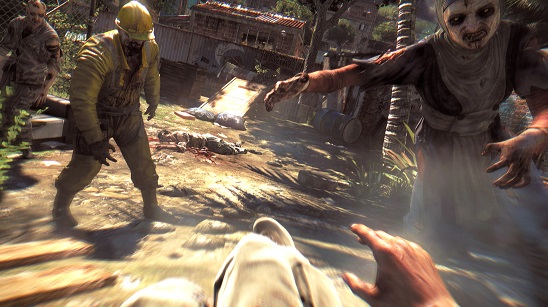 These former humans are infected by an unknown virus which causes them to have reduced brain function and increased aggression. There are several specific types of Infected, though the majority of them use either their hands or basic melee weapons to attack. At night the infected become stronger and rather than normal kill on sight, they become more of a sound-hoarding enemy making the night even more deadly. Nightfall is risky in all cases due to lack of mobility and stealth maneuvers so beware of the infected especially at nightfall.

"A variation of rabies", as said by Dr.Zere

The majority of Infected are the slow moving Zombies looking for easy prey. They are easy to see and avoid compared to the other infected. This is because of their significantly decayed, ripped and damaged bodies. They typically travel in large groups or packs and, while they lack speed, they make up for it in number. These infected are quiet at a distance and blend into the darkness. They are easy to overlook and often surprise unwary travelers. Taking on a horde of Biters is essentially suicide if their numbers are large.

Virals are Biters that run extremely fast and have the ability to climb, they travel either at the front of hordes or alone. While taking on a horde of Biters is suicidal, they can be effectively fought in smaller numbers. Virals also recently turned, allowing them to retain most of their brain science, which allows them to run. Virals are also mostly attracted to sound. when a gun is shot, and an explosion is heard, the sound of screaming added with the sound of metal being smashed on is a sign that a viral heard that. A good, and also fun thing to do is to get on a high ledge, and then kick the viral's head, or attack it with a melee weapon.

Toads are a special kind of infected, so infected that it shoots projectile vomit that burns the player if he's hit. Toads are also slightly more agile than other infected, being able to jump on the rooftops to be able to aim at it's prey. Its ugly appearance and way of fighting influenced the way the survivors named that particular infected. Toad's can also do some sort of 'quick spit' if the player is close enough. It's dodge able, but the player would have to be quick enough. One thing not previously mentioned is the fact that Toads have significantly less health than most "special" infected. Usually should only take 4 or 5 hits from a pipe, plank, etc. but as you progress these Toads should be no problem to you.

Screamers are small children who have been infected by the virus. They are a stationary zombie and pose no threat if left alone. Once approached however, they will emit a deafening scream that causes the player damage over time while attracting more zombies. The player is able to silence a screaming Screamer by suffocating it with the action button if they are nearby. It is possible to use guns or throwing weapons on some Screamers from a distance to prevent them from triggering.